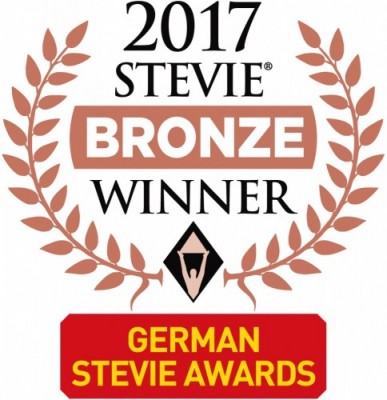 Epicor Software Corporation, a global provider of industry-specific enterprise software to promote business growth, has been honoured with a 2017 Bronze German Stevie® Award in the 'Company of the Year–Computer Software–More than 250 Employees’ category.

The German Stevie Awards are the most encompassing business awards. In their second year they have already established a leading role in Germany. They are part of the Stevie Awards programs, which are widely considered to be the world's premier business awards, conferring recognition for achievement in the workplace in programs such as The International Business Awards for more than a decade. All organizations in Germany were eligible to submit nominations.

Nicknamed the Stevies for the Greek word for “crowned,” the awards will be presented to winners at a gala banquet at the Fairmont Hotel Vier Jahreszeiten in Hamburg on 31 March 2017.

With industry-specific solutions, Epicor helps companies to maximise resources and focus on their growth through greater efficiency and less complexity.

“We are on the cusp of Industry 4.0 and German manufacturing companies in particular need to focus not only on production digitisation, they also need to realise the importance of gaining access to real-time data from across the entire organisation in order to achieve competitive advantages. A modern enterprise resource planning (ERP) system can help organisations collect data from machines and shop floor, and turn it into actionable insights for better decision making. The 2017 Bronze German Stevie Award is a great achievement and confirms our continued commitment to drive enterprise growth with advanced ERP solutions.”

Gold, Silver and Bronze Stevie Award winners were selected by about 50 executives who participated in judging the weeks of February 1 to February 20, 2017. The winner of the Grand Stevie Awards will now be determined from among all winners. The Grand Stevie winners will be announced at the 31 March ceremony in Hamburg.

“We are delighted that the German Stevie Awards are once again awarding outstanding and above all, innovative winners,” said Michael Gallagher, president and founder of the Stevie Awards. “We look forward to celebrating the winners and presenting them their awards at the awards ceremony in Hamburg on March 31. We extend our most heartfelt congratulations to all of this year’s Gold, Silver and Bronze Stevie Award winners.”

Details about the German Stevie Awards and the list of Stevie Award winners are available at www.StevieAwards.com/Deutschland.